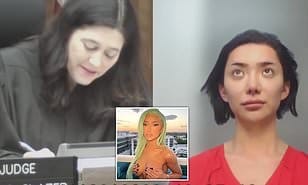 A Florida judge told transgender influencer Nikkita Dragun that she had to remain in the men’s prison unit where she was detained following her arrest for walking naked around a hotel, Your Content has learned.

Transgender influencer Nikkita Dragun was told she had to remain in the men’s unit of the prison where she was detained during a bail hearing Tuesday.

Representatives for the influencer said her imprisonment in the men’s unit was ‘extremely disturbing and dangerous.

Dragun, 26, was locked up after staff at The Goodtime Hotel called police to report a person being ‘extremely disorderly’ and ‘causing a disturbance.

The Instagrammer was reportedly walking around the hotel’s pool area naked, and threw water at hotel staff and police.

She was arrested and charged with felony battery on a police officer, and was released from prison on Wednesday.

Dragun was then sent to the men’s unit at the Turner Guilford Knight Correctional Center before being released without bail on Wednesday,‘according to TMZ.