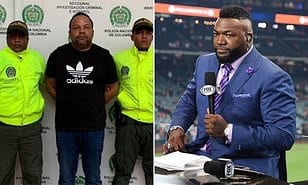 A once-powerful Dominican Republic drug lord who was linked to the shooting of Boston Red Sox legend David Ortiz pleaded guilty to drug trafficking charges, the U.S. Department of Justice announced Monday, Your Content has learned.

César Peralta pleaded guilty to drug trafficking charges in the United States District Court for the District of Puerto Rico on November 2.

The 47-year-old allegedly ordered the June 2019 shooting of Boston Red Sox legend David Ortiz at a nightclub in the Santo Domingo, Dominican Republic.

However, Peralta has never been charged for it by Dominican authorities.

Peralta led a drug trafficking network that smuggled cocaine from the Dominican Republic, Venezuela, Colombia, and the Netherlands Antilles.

Multiple tons of cocaine were shipped to Puerto Rico and the continental United States.

Peralta is facing 10 years to life in prison and is set to be sentenced May 2023,‘according to FLIPBOARD.