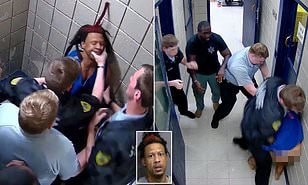 Security footage from a Georgia jail shows a black detainee being beaten up by five jailers at once, Your Content has learned.

Jarrett Hobbs, 41, was arrested in Georgia in early September for possession of an illegal drug, speeding and driving with a revoked or expired license.

Video footage from the Camden County jail later shows Hobbs getting pummeled in his cell by several jailers.

Upon widespread release of the video, the Camden sheriff said he has ordered a investigation be opened ‘immediately’

Hobbs was on probation in North Carolina, where he previously pleaded guilty to a count of conspiracy to commit bank and wire fraud,‘according to FlipBoard.