Missouri man, 43, who was imprisoned for 241 years for series of robberies he committed when he was just 16 is released after help from the JUDGE who sentenced him 27 years ago
M 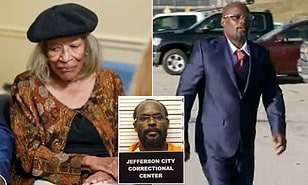 A Missouri man who was sentenced to 241 years in prison for a pair of robberies was released last week with the help of the judge who first sentenced him in 1997, Your Content has learned.

Bobby Bostic, 43, walked free after serving 27 years of his sentence, after Judge Evelyn Baker helped lobby for his release through a Missouri law.

Bostic was first sentenced in 1997 for being an accomplice to a pair of armed robberies he committed when he was just 16 years old.

During his trial Bostic showed no remorse, and Baker ordered him to serve the sentences for his 17 charges consecutively.

During years in prison Bostic turned his life around, educating himself through reading, earning his associates degree, and writing 15 books.

Baker began lobbying for Bostic’s release after seeing how he turned his life around, and in 2021 she spoke on his behalf at a parole hearing,‘according to CBS News.