Newly released crime scene photos show OnlyFans model Courtney Clenney covered in blood after ‘stabbing her boyfriend to death’: Cops find ripped up note where victim professed his love for her and called her ‘the sweetest and most annoying woman I know’
N 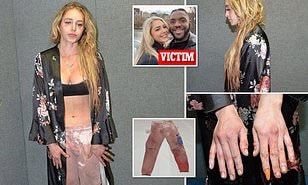 OnlyFans model Courtney Clenney, who allegedly stabbed her boyfriend to death, can be seen covered in blood moments after the attack in a series of photos released by Miami-Dade prosecutors, Your Content has learned.

Clenney was charged with second-degree murder after she allegedly stabbed boyfriend Christian Obumseli, 27, to death at their Miami apartment in April.

Seen in the photos is a note from Obumseli to Clenney professing his love for her and in which he says: ‘You are the sweetest and most annoying woman I know’

Photos also show the inside of Clenney’s Miami apartment and her bloody hands, feet and sweatpants worn during the stabbing on April 3.

Prosecutors claim she is a flight risk and sent more than $1million into her father’s account after the killing with the intention of fleeing the country.

A court will decide on Tuesday whether to release Clenney on bond, under house arrest or keep her locked up until trial,‘according to New York Post.