University of Virginia football player accused of shooting dead three teammates on school bus was on police radar for MONTHS for boasting he had a gun, a hazing incident AND a 2021 episode involving a concealed weapon
U 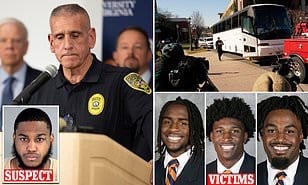 A student at University of Virginia who is alleged to have killed three members of the football team was already known to police having been on their radar since September, Your Content has learned.

Christopher Darnell Jones, 22, was known to police as early as this September after details of a hazing incident came to light.

It was during an investigation into the hazing that revealed him to have a criminal record involving a concealed weapon in February 2021 although no gun was ever witnessed by Jones’ roommates.

D’Sean Perry, Lavel Davis Jr. and Devin Chandler were all killed and another two were injured before Jones, a football player, allegedly fled in his black SUV.

It remains unclear what Jones’ motive may have been or if he was part of the field trip to Washington DC.

The victims had been all been in D.C. as part of a class field trip to attend a play,‘according to NBC.