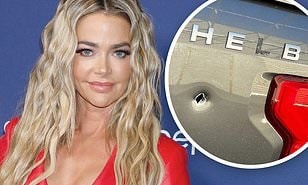 Denise Richards’ vehicle was shot at on Monday, November 14 during a potentially life-threatening road rage incident in Los Angeles, Your Content has learned.

Denise Richards’ vehicle was shot at during a road rage incident in Los Angeles on Monday, November 14.

The former RHOBH star, 51, was en route to Popsicle Studio LA with her husband Aaron Phypers when the incident occurred.

Phypers was in the driver’s seat at the time and having trouble locating the studio which irritated a driver behind them.

Though Phypers let them pass, the driver decided to ‘shoot at’ the back end of their truck on the driver’s side.

The shot hit the back end of their truck on the driver’s side.

Both Richards and 50-year-old Phypers were uninjured but the actress was ‘unnerved’ and ‘sobbing’,‘according to People.