‘Make America great and glorious again’: Trump defies Republican critics by officially announcing he IS running for president in 2024 for the third time in front of Melania and Barron – and says U.S. ‘can’t take four more years’ of Biden and the Democrats
& 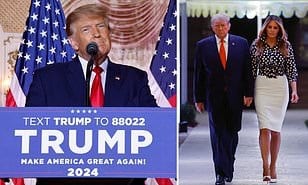 Donald Trump has officially announced he is running for president for the third time in 2024 in a speech attacking President Biden, the ‘radical left’ Democrats and their record on the economy and the world stage in the two years since he left office, Your Content has learned.

‘In order to make America great and glorious again, I am announcing my candidacy for president’, he said.

Former president defied Republican critics and those who blamed him for the GOP’s disappointing midterms.

Confirmed run in front of family in his Mar-a-Lago ballroom with opulent gold trimmings and chandeliers.

Trump will now go to battle with fellow Republicans likely vying to be on the ticket, including Ron DeSantis,‘according to Politico.