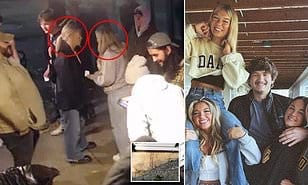 Chilling new footage has emerged of at least two of the four University of Idaho students who were slaughtered in their house on Sunday after ordering takeout from a food truck and chatting with other kids just two hours before they were savagely murdered and left to bleed out, Your Content has learned.

Madison Mogen and Kaylee Goncalves ordered a $10 portion of carbonara from the Grub Truckers at 1.43am.

They waited 10 minutes, during which time they took photos of each other and chatted with other kids nearby.

They arrived at the truck with an unidentified young man who waited with them until they received their food.

The girls didn’t talk to the young man and walked off without him; he eventually walked in a different direction.

The video shows them leaving at 1.53am – police say they were killed sometime between 3am and 4am.

Police sources told DailyMail.com it was a targeted attack in their shared home; the kids ‘bled out’,‘according to YouTube.