‘Watch out for each other’: Cops investigating murder of four Idaho students warn of possible ‘threat to community’ – as they reveal two other students were in the house at time of killing, but the 911 call wasn’t made for nine hours
& 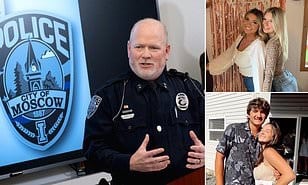 Shaken police officials and university leaders in Moscow, Idaho on Wednesday told the community to ‘watch out for each other’, as they confirmed they are yet to identify a suspect or find a murder weapon three days after the stabbing of four students – and revealed two roommates were inside the house at the time of the killings, Your Content has learned.

Four University of Idaho students were found stabbed to death on Sunday morning in the Moscow, Idaho house they shared.

Moscow police believe the three women and one man were murdered between 3-4am on Sunday morning, and are hunting for an ‘edged weapon’

Veteran officers in Moscow have described the scene as incredibly gruesome, as the four were left to bleed to death inside the student house.

On September 12, students said they were confronted by a man who flashed a knife at them. That person handed themselves into police.

Police said that the incident was not related, but they are ‘looking into every lead’,‘according to DailyMail.