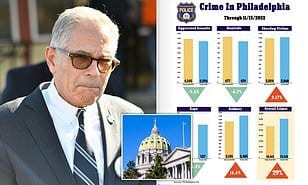 Woke Philadelphia District Attorney Larry Krasner faces a state Senate trial and possible removal from office after the Republican-led Pennsylvania state House voted to impeach him., Your Content has learned.

Pennsylvania legislators voted Wednesday to impeach Krasner over progressive policies he has enacted amid rising crime in the city.

The move toward removing District Attorney Larry Krasner began months ago and picked up momentum in the weeks before the midterm elections.

But the 107-85, nearly party-line vote marks a dramatic escalation of attacks about crimefighting policies against Democratic mayors and prosecutors.

The vote sets the stage for what would be the first Pennsylvania Senate impeachment trial in nearly three decades.

Republicans have a 29-21 majority in the state Senate that will become a 28-22 majority early next year, so they’d need the support of some Senate Democrats,‘according to The Washington Post.