‘I was scared and shaking’: 10-year-old who evaded potential kidnapping by asking a cashier to ‘act like his mom’ details the terrifying incident – while revealing advice from his dad that helped him realize he was in danger
& 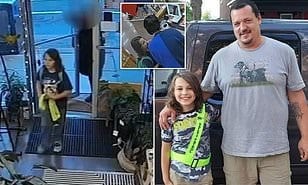 A 10-year-old boy has opened up about how ‘scared and shaking’ when he ducked into a local shop to escape a woman who was following him after recalling how his father taught him to find an adult if he was ever in trouble, Your Content has learned.

Sammy Green, a fourth grader from Pottstown, Pennsylvania, was walking home from school last Friday when a woman started following him.

The stranger offered to buy him food and claimed to know his family.

Sammy told Good Morning America that he was ‘scared and shaking,’ but he remembered his father taught him to find an adult if he was ever being followed.

The boy made the quick decision to duck into Dani Bee Funky, a local store.

Surveillance footage shows the woman walking beside him right before he entered the shop and headed straight to the counter.

The stranger continued to lurk outside as he asked the cashier, 17-year-old Hannah Daniels, to pretend to be his mother because he was being followed.

The family is not pressing charges against the woman, who has been referred for mental health help after being located by the Pottstown Police Department,‘according to The New York Post.