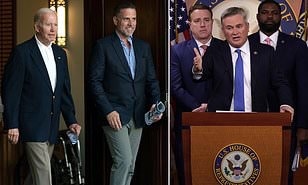 Rep. James Comer, the Oversight Republican leading the GOP probe into Hunter Biden, ruled out a subpoena for the president’s testimony but said they will press forward with a subpoena for his son, Your Content has learned.

House Republicans announced they are launching an investigation into Joe and Hunter Biden a day after their party clinched the majority.

Comer, who is likely to be the next chairman of the Oversight Committee, noted that subpoenaing a sitting president launches executive privilege issues.

‘The Democrats sent out subpoenas like junk mail, and that’s why it’s hard to get people to come in,’ Comer said.

Biden has long denied having any involvement in and discussions of his son’s foreign business dealings.