University of Idaho quadruple murder was ‘personal’: Autopsies reveal four kids were stabbed multiple times with large knife – as pictures emerge of one victim with her ‘bereft’ boyfriend who was planning to take her home for Thanksgiving
U 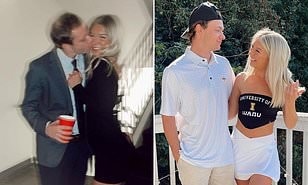 The four Idaho students murdered in their home on Sunday were stabbed multiple times by a long and wide knife in an attack that the coroner says was ‘personal’, Your Content has learned.

Police in Moscow, Idaho, have not made any arrests and their slow pace is terrifying students still there.

Their autopsies reveal they were stabbed multiple times with a long knife and some had defensive wounds.

Their wounds were deep and inflicted by a ‘long, large’ knife – but the murder weapon has not been found.

Coroner Cathy Mabbutt has described the killings as ‘personal’ and ruled out murder suicide,‘according to Independent.