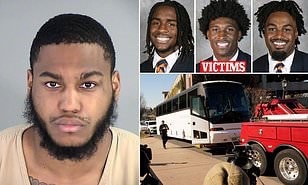 University of Virginia shooting suspect Christopher Darnell Jones uttered an eerie message to his ex-teammates ‘you guys are always messing with me’ before allegedly killing them execution style, Your Content has learned.

Christopher Darnell Jones, 22, was arrested on Monday morning for shooting five people on the bus.

Three were killed and another two injured before Jones, a football player, fled in his black SUV.

D’Sean Perry, Lavel Davis Jr., and Devin Chandler were all killed and another two were injured.

Prior to the shooting, the victims had been in Washington, DC, as part of a class field trip to attend a play.

The arrest warrants for Jones charged him with three counts of second-degree murder and three counts of using a handgun in the commission of a felony,‘according to FOX News.