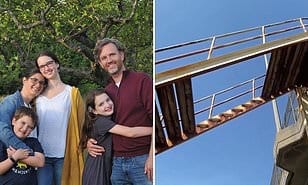 The widow of a Boston University law professor filed a wrongful death lawsuit against the state more than a year after her husband fell 20 feet to his death when he slipped through a rusted staircase, Your Content has learned.

Sarah Sacuto filed a wrongful lawsuit against the state more than a year after her husband fell 20 feet to his death.

Milton David Jones, 40, slipped through a rusted staircase in September 2021 that had been closed for 20 months prior to his death.

Jones’ death was ruled an accident, but the lawsuit said that it could’ve been prevented if the state had properly blocked off the stairwell.

It’s still unclear why Jones went on the stairwell, but Sacuto said he was out on a run the day that he died,‘according to Boston.com.