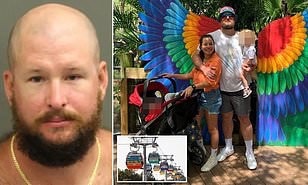 A father-of-two was arrested at Disneyland’s food and wine festival after chugging two beers and nearly falling off the Skyliner ride, Your Content has learned.

Chase Holderly, 30, of Merritt Island, Florida, got drunk at Disneyland’s food and wine festival on September 10 after chugging two beers in 30 seconds.

After he became intoxicated, he was observed ‘shaking everyone’s hand in line, high-fiving people, and was stumbling’

When he was approached by security to leave the premises, he reportedly stuck his finger in the man’s chest and yelled at him before heading to the Skyliner.

After ‘alarming’ those waiting in line, he boarded the ride before attempting to get off to yell insults at security, nearing falling off.

He was eventually arrested for disorderly intoxication and trespassing after yelling at security and nearly falling off the Skyliner platform.

He took a plea deal earlier this month and paid a nearly $300 fine and received no additional jail time,‘according to FLIPBOARD.