Moment cops arrest wasted billionaire Tyson Foods heir , 32, after he broke into female stranger’s home and passed out in her bed
M 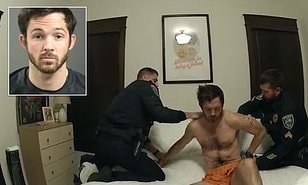 A college-age woman came home to find him passed out in her home.

Video shows cops dragging an uncooperative Tyson out of bed in his underwear.

Tyson appeared disoriented and tried to go back to sleep when confronted.

He has apologized, saying the incident is ‘inconsistent with his values’

Tyson, 32, is heir to the Tyson Foods fortune and was recently appointed CFO.

His family is worth $3.3 billion and built the $24 billion meat company,‘according to The New York Post.