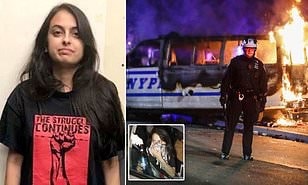 A New York City attorney was sentenced to 15 months behind bars on Friday for firebombing an empty New York City police vehicle with another lawyer during protests over the murder of George Floyd, Your Content has learned.

Urooj Rahman asked a judge to spare her prison time and give her a ‘second chance’ to redeem herself for what she called a momentary lapse of judgement.

‘I’m so incredibly sorry for my reckless and wrong actions,’ a tearful Rahman said in federal court in Brooklyn on Friday.

U.S. District Judge Brian Cogan scolded her for thinking she could get away with violent protest.

Surveillance cameras recorded Rahman hurling an incendiary device into a parked police vehicle, setting fire to its console on May 30, 2020.

No one was injured in the attack, but the vehicle was severely damaged,‘according to NBC.