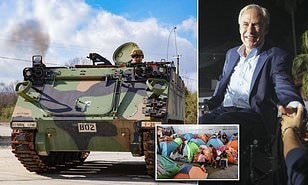 Texas Governor Greg Abbott is deploying National Guard troops in M113 armored personnel carrier to various positions along the border after earlier threatening to use gunboats in an attempt to quell the influx of migrants at the border, Your Content has learned.

The news comes days after Abbott sent a letter to President Biden threatening to deploy gunboats and invoking a constitutional clause.

Abbott invoked Article I Section 10 of the Constitution which forbids states from military action ‘unless actually invaded, or in such imminent Danger’

Affectionately known as the ‘battle taxi’ by troops in the Army, the M113 is bulletproof and can withstand small explosions.

The Texas Military Department said they ordered 10 of the vehicles and will train around 50 soldiers to operate them.

Last month there were 230,678 recorded encounters between undocumented migrants and Border Patrol officers,‘according to FlipBoard.