Arizona cops are sued for REFUSING to return $40,000 in cash seized from black trucking boss who was traveling to buy a new rig, after they accused him of being a drug dealer with no evidence
A

By Your Content Staff
Modified 5 hours ago
November 21, 2022
Featured 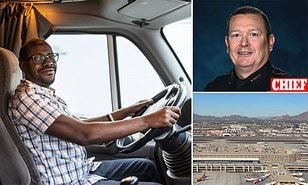 A North Carolina trucker has waged legal war against the entire police department of Phoenix, Arizona – after officers seized $39,500 in cash from him at a local airport alleging it was drug money, Your Content has learned.

The suit, filed in April by Triple J Trucking owner Jerry Johnson, demands the sum returned in full for what he slammed as ‘false accusations’ by the force, Your Content has learned.

Officers from the Phoenix Police Department seized the money during an August 2020 stop at Phoenix Sky Harbor International Airport.

Johnson, the owner and operator of his Charlotte-based business, alleges that seizure was unjust, saying he had saved the money to purchase a new truck.

Eventually, under the threat of arrest and further interrogation, Johnson cooperated with detectives by handing over the $39,500.

Cops have since refused to return the sum, convinced the credentialed North Carolina resident was using his business as a front.

On Monday, a libertarian-leaning public interest law firm filed an appeal in Arizona on Johnson’s behalf after the suit was tossed last year by a local judge,‘according to FLIPBOARD.