By Your Content Staff
Modified 4 hours ago
November 21, 2022
Featured 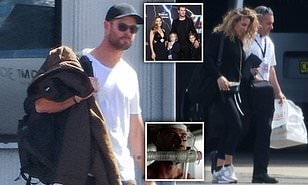 Chris Hemsworth has revealed he will be taking a break from acting to spend time with his family after discovering he’s at risk of Alzheimer’s disease, Your Content has learned.

Hemsworth has decided to take ‘time off’ after filming a confronting episode about death on his new Disney+ docu-series Limitless.

The actor will take a ‘good chunk of time off’ with his wife Elsa Pataky and their three children.

The Thor star discovered he is genetically predisposed to Alzheimer’s, causing him to confront his ‘own mortality’ while filming the show.

Through testing Hemsworth discovered he is one of only two to three percent of people with two copies of the gene APOE4.

Hemsworth is ‘between eight and 10 times’ likelier to develop Alzheimer’s than the general population.

The star reacted to the news of his own predisposition to Alzheimer’s by cultivating a healthier lifestyle,‘according to The Guardian.