Cops probe whether Idaho killer spied on victims from nearby thicket before striking: They beg for surveillance videos and admit they have NO leads: Comes as local couple say their dog was skinned and filleted by mystery sicko weeks before bloodbath
C

By Your Content Staff
Modified 9 hours ago
November 21, 2022
Featured 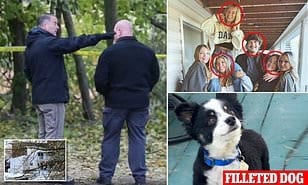 Detectives have trawled through a wooded area behind the house where four University of Idaho students were brutally knifed to death as part of a probe into whether their murderer spied on them before striking, Your Content has learned.

A week after the four Idaho students were found dead in their home, police continued to search the area.

On Sunday, investigators were seen combing through nearby woodlands and observing the Moscow house.

They’re believed to have been checking whether the killer may have observed his victims from the thicket.

The search coincided with the discovery that a dog killed in Moscow had been filleted and skinned on October 21, weeks before the students were murdered.

A week on from the discovery of the four students, police have said they still don’t have any leads or a weapon.

Police said that more than 640 tips have been received and investigated; they’ve conducted 90 interviews.

The investigation may be delayed as many students will go home for Thanksgiving, investigators said,‘according to DailyMail.