By Your Content Staff
Modified 7 hours ago
November 21, 2022
Featured 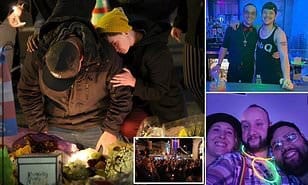 Heroic clubbers have been praised for overpowering the gunman who opened fire at an LGBTQ club in Colorado Springs, killing five people, Your Content has learned.

One partygoer whacked the gunman with his own gun before another hero pinned him down on the floor.

Derrick Rump and Daniel Aston were among five killed Saturday at Club Q in Colorado Springs.

Both men worked as bartenders at the establishment and are so far the only two named victims of the attack.

Five in total were killed when Anderson Lee Aldrich, 22, opened fire at the Colorado Springs nightclub.

Another 25 people were injured in the attack, which is currently being investigated as a hate crime.

Aldrich, the sole suspect in the incident, is now in protective custody at a local hospital for unknown injuries.

He was previously arrested for making a bomb threat in June 2021 but was never formally charged,‘according to CNN.