Man, 22, lying on NYC subway tracks is killed after train runs him over – followed by another subway death just HOURS after, as violent crime on transport system rises
M

By Your Content Staff
Modified 6 hours ago
November 21, 2022
Featured 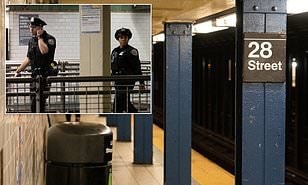 A 22-year-old man lying on subway tracks in Manhattan during the early hours of Sunday morning was struck and killed by a train, hours before a second victim was struck by a train in midtown, Your Content has learned.

Two men in New York City died Sunday when they were struck by oncoming subway trains.

The 22-year-old was lying on the tracks at the West 28th Street station, while the second man was killed several hours later in midtown.

While it is unclear precisely what the 22-year-old was doing on the tracks, the second victim was attempting to claim property that had fallen onto the tracks.

Subway deaths and crime have been on the rise inside the city’s famed transportation system since the COVID-19 pandemic.

Despite a subway safety plan from Mayor Eric Adams meant to address the issue ‘crimes on the city’s subways are now up 41 percent over last year’,‘according to FLIPBOARD.