‘My firstborn died in my arms, I felt his last heartbeat’: Elon Musk reveals why he will never let Alex Jones back on Twitter because he used ‘the deaths of children for gain or fame’ by claiming Sandy Hook mass shooting was a hoax
&

By Your Content Staff
Modified 8 hours ago
November 21, 2022
Featured 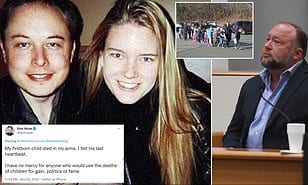 Elon Musk has doubled down on his refusal to allow broadcaster and conspiracy theorist Alex Jones back on Twitter, saying as a parent who himself lost an infant, he has ‘no mercy’ for ‘anyone who would use the deaths of children for gain, Your Content has learned.

Elon Musk tweeted on Friday that Alex Jones would not be reinstated on Twitter.

When pressed, Musk cited the death of his son and Jones’ Sandy Hook scandal.

Broadcaster Jones previously claimed on his podcast Sandy Hook was a hoax.

On the weekend Trump had his profile reactivated after Musk hosted a poll,‘according to DailyMail.