Anti-Semitic thug behind plot of attack NYC synagogues is JEWISH and cares for his grandfather who survived the Holocaust, his lawyer claims: Mayor Eric Adams reveals men wore Nazi armbands on train before their arrest
A

By Your Content Staff
Modified 6 hours ago
November 22, 2022
Featured 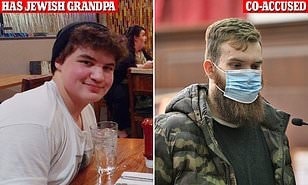 Prosecutors and relatives of one of the alleged co-conspirators and Nazi fanatics that plotted to blow up a string of Manhattan synagogues said he is Jewish – and his grandfather is a Holocaust survivor, Your Content has learned.

Matthew Mahrer, 22, and Christopher Brown, 21, were arrested after they were planning to attack NYC synagogues and members of Jewish community.

The pair were busted on Friday on the Long Island Rail Road with Brown carrying weapons and a Nazi armband, according to police sources, a report said.

Mahrer’s grandfather Stuart Rubenstein expressed shock: ‘I don’t know how he got involved. The other kid must have talked him into it,’ he said.

Mahrer was arraigned Saturday in court and has been charged with criminal possession of a weapon.

Brown was in court Sunday to be arraigned on charges relating to planned attacks on New York City synagogues on Friday.

Officials have said the pair purchased a handgun in Pennsylvania for $650 and were planning to use it to attack Jewish people in the area.

Brown also said he was planning to ask a priest if he should ‘become a husband or shoot up a synagogue and die’ according to a post made on Twitter,‘according to FlipBoard.