Disney ‘fired woke CEO Bob Chapek after colleagues including CFO complained he was unfit for the job: Axed boss was “blindsided” by dismissal and shock return of his predecessor Bob Iger’
D

By Your Content Staff
Modified 3 hours ago
November 22, 2022
Featured 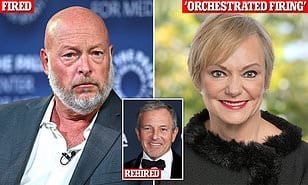 Disney fired its CEO Bob Chapek after receiving several internal complaints from senior staffers that the exec was running the company into the ground, people familiar with the matter have revealed, Your Content has learned.

Brass from the company announced the change in a statement Sunday night, but did not provide a specific reason for Chapek’s dismissal.

The revelation regarding senior leadership’s dissatisfaction with the short-lived CEO coincides with previous reports of staffers alleging Chapek had mishandled the company since assuming the position in February.

Since then, Disney share prices have fallen drastically, by roughly 40 percent so far this year – losses further compounded by a more than $10billion deficit incurred during the pandemic.

The company’s poor performance under Chapek has been blamed on factors ranging from large losses in the streaming business to his hesitance to speak out against Florida Gov. Ron DeSantis’ Don’t Say Gay Bill.

The company announced Iger’s reappointment Sunday night, putting an end to the reign of his handpicked heir and longtime lieutenant.

Iger has worked for Disney for more than four decades – including 15 years as its CEO before he left in 2020,‘according to FlipBoard.