Girl, 11, killed by out-of-control truck while performing with her dance troupe at North Carolina Christmas parade as it’s revealed driver was previously ticketed for not maintaining his truck
G

By Your Content Staff
Modified 10 hours ago
November 22, 2022
Featured 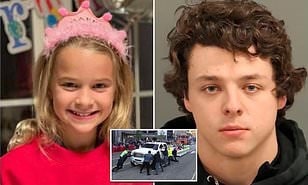 An eleven-year-old girl was killed by an out of control truck while performing at a North Carolina Christmas parade on Saturday, Your Content has learned.

Hailey Brooks died after a pickup truck pulling a parade float in Raleigh lost its brakes and began to accelerate into her dance troupe.

The driver of the truck, 20-year-old Landen Christopher Glass, was arrested and charged with misdemeanor death by motor vehicle, among other charges.

It was revealed that Glass has a history of negligent car ownership, with his record showing a litany of citations for failing to have his truck inspected.

Brooks was taken to a hospital after she was struck, but later declared dead,‘according to New York Post.