By Your Content Staff
Modified 4 hours ago
November 22, 2022
Featured 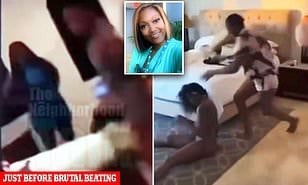 A new video of the North Carolina woman who suffered a broken neck after being brutally beaten at a Mexican resort shows her laughing with her friends just hours before she died, Your Content has learned.

Video of Shanquella Robinson laughing and joking with her friends hours before her death has surfaced online.

Robinson, 25, was part of a group that traveled from Charlotte to Cabo on October 28 and rented out a villa to celebrate a friend’s birthday.

She was found dead the next day, when her friends told her mother she had died of alcohol poisoning.

It later emerged she had suffered a broken neck and a leaked video showed Robinson had been attacked while naked in her bedroom,‘according to FLIPBOARD.