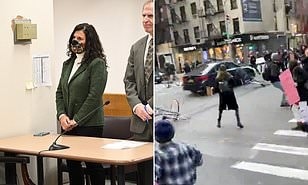 A New York City mother-of-three who plowed her BMW into a group of BLM protesters in 2020 has yet again refused a plea deal in favor of a jury trial, Your Content has learned.

Kathleen Casillo, 54, rejected a plea deal for a second time on Tuesday.

She appeared in Manhattan Criminal Court where she was offered six days of community service and one-year license suspension, but still opted for a trial.

Casillo, of Queens, plowed her BMW into a group of BLM protesters in 2020.

She previously claimed the demonstrators came up to her car and called her ‘a white privilege b**ch’ before banging on the vehicle, which caused her to panic,‘according to The New York Post.