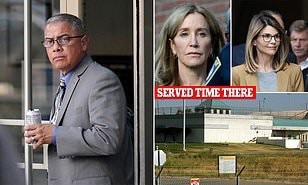 A federal prison warden ran a ‘rape club’ targeting female inmates who he sexually assaulted and forced to pose naked, a court heard, Your Content has learned.

Ray J Garcia is accused of abusing inmates at the federal prison in Dublin, California.

He’s charged with abusing three inmates between December 2019 and July 2021, but investigators fear there could be six victims.

Garcia allegedly groped the women, and made them pose naked or in skimpy clothing.

Felicity Huffman and Lori Loughlin both served time in the Dublin facility over the varsity blues scandal, though there’s no suggestion they were victims.

Garcia faces up to 15 years in prison if he’s convicted of the sex attacks. He denies the charges against him,‘according to The New York Post.