‘Anyone recognize this person or car?’: Elon releases clip of balaclava-clad ‘crazy stalker’ who followed car his son X was traveling in, blocked its path and climbed on hood – as he bans account by man who tracks his private jet
& 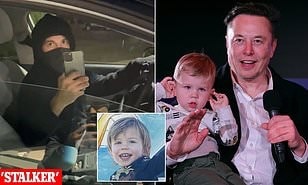 Elon Musk posted a video of a ‘crazy’ man believed to have stalked the car his child was traveling in – before blocking the vehicle’s path and climbing on top of its hood, Your Content has learned.

Elon Musk posted a video of the alleged stalker in a bid to track him down.

The man, covering most of his face, was driving a white Hyundai.

Musk says that the man stalked the car X was traveling in, before blocking its path and then jumping on the car’s hood in the terrifying ordeal.

The Twitter CEO has previously said that an online account which tracks the movement of his private jets was a security risk.

On Wednesday the account was suspended, with Musk seeming to blame it for an incident in which a car carrying his child was followed by a stalker,‘according to NewsWeek.