More JFK files could be over: Biden administration set to unseal thousands of classified documents on the assassination and the CIA surveillance operation on Lee Harvey Oswald (but will they spark more conspiracy theories)
M 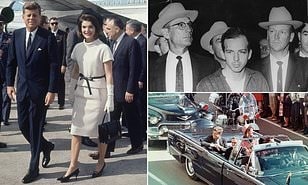 Thousands more classified documents about the assassination of President John F. Kennedy are expected to be unsealed on Thursday, offering another look inside a murder that spawned a slew of conspiracy theories,Your Content has learned.

They will focus on the 201 ‘personality file’ the CIA wrote on Lee Harvey Oswald.

And they will likely include information on Oswald’s trip to Mexico City.

Officials said the releases were unlikely to offer support for conspiracy theories,‘according to POLITICO.