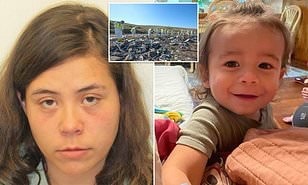 Quinton Simon’s 22-year-old mother has officially been indicted on 19 counts, one month after the infant’s remains were found in a Georgia landfill, Your Content has learned.

A grand jury indictment says she hit her 20-month-old son ‘with an object’ that caused ‘cruel and excessive pain,’ which led to the toddler’s death.

She then allegedly left her home in the early morning hours of October 5 to dump Quinton Simon’s remains at a dumpster in a nearby trailer park.

FBI and Georgia Bureau of Investigation officials finally found his remains in a Savannah landfill on November 18, and Leilani was arrested days later,‘according to NBC News.