‘Without my back up there, I would not be here today’: Florida cop, 26, maintains she nearly died of fentanyl exposure in traffic stop despite wearing GLOVES
& 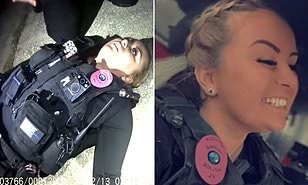 The Florida cop who nearly lost her life following a routine traffic stop after she was exposed to fentanyl that perps had rolled up in a dollar bill has thanked her back up for saving her life, Your Content has learned.

Florida police officer Courtney Bannick was exposed to fentanyl she found on passengers during a traffic stop in the early hours of Tuesday morning.

Officers heard Bannick gasping for breath on her radio and rushed to help.

In a new Facebook post, Bannick said that her back up saved her life and encouraged officers not to search perps alone in future.

The officer also said that she herself wanted the story of her exposure publicly released in the hope helping other.

Bannick was taken to a hospital and is expected to recover fully, cops said the people who had the narcotics are likely to be charged with felonies,‘according to FLIPBOARD.