Elderly Canadian resident, 73, with $1million lawsuit against condo building murders ‘five board members in each of their apartments’ – before being shot dead by cops
E 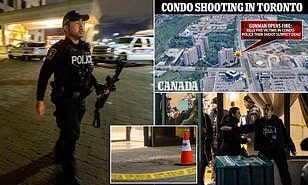 Five people were shot dead by a gunman who went on a rampage in suburban Toronto condo building before cops stormed the building and killed him, Your Content has learned.

A total of six people were killed, including the gunman, who was shot by police.

Police were called to the condo in Vaughan, Ontario, before 7.30pm on Sunday.

It is believed that the shooter was an ‘elderly resident’ of the building.

Mass shootings are rare in Toronto – a city prided on its longstanding safety,‘according to FLIPBOARD.