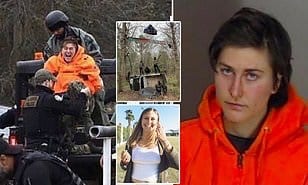 An Antifa goon was pictured screaming as she was arrested for allegedly plotting terror attacks at a planned Atlanta police academy, Your Content has learned.

Serena Hertel, 25, is one of a group of five who were arrested at a violent autonomous zone near Atlanta on December 13.

Her brother, Hunter Hertel, died aged 27 after consuming a cocktail of drugs in a LA hotel.

Their father, architect David Hertel, paid tribute to his son for ‘understanding of lives lost to senseless police violence’

Hertel has been charged with criminal trespass, domestic terrorism, aggravated assault, obstruction, and inciting a riot. She’s been denied bail

She also made an appearance in a Guardian article sympathetic to her cause which was funded by billionaire George Soros, famed for funding woke DAs,‘according to FLLPBOARD.