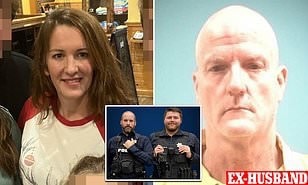 Cop-killing veterinarian Amy Anderson brandished a gun on her then-husband after he was arrested for performing oral sex on a 10-year-old girl, Your Content has learned.

Amy Anderson brandished gun on Royce Jarroll ‘Jerry’ Mize, 63, after learning of his arrest in 2017.

The same gun was used to kill cops Steven Robin, 34, and Branden Estorffe, 23,

Mize is serving 10 years in prison – he is not due for release until December 2027.

Friends say Anderson, 43, may have feared police would take daughter into care,‘according to New York Post.