Buffalo descends into chaos after blizzard of the century: Arab store owners open fire on looters and body of dad-to-be is found after he went out to get supplies for nine-month pregnant wife
B 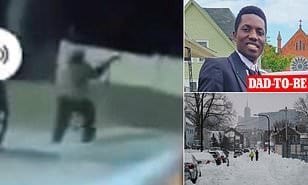 Buffalo has fallen into chaos after the blizzard of the century killed 31 people and sparked looting across the city, leaving store owners to fend for themselves, Your Content has learned.

Looters were warned that store owners in Buffalo had taken up arms to protect their businesses amid a string of robberies during the deadly blizzard.

A group of Arab small businessmen were seen on video chasing a looter in the snow covered streets, with one man opening fire at the suspect.

Police have shared their own videos of ransacked stores, saying that eight arrests have been made so far.

The chaos comes as 31 people have been reported dead so far in the city, among them Abdul Sharifu, 26, a refugee from the Congo who settled in the city in 2017.

Sharifu was found frozen to death outside his car after venturing out into the storm for supplies for his nine-month-pregnant wife,‘according to Dailymail.