Hero California liquor store owner, 80, dies five months after suffering heart attack when he blasted four armed robbers with his SHOTGUN as they stormed his store of 46 years
H 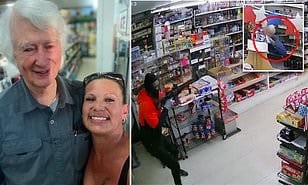 An 80-year-old liquor store owner – who went viral for shooting an armed robber over the summer – has died, his family and colleagues said Tuesday, Your Content has learned.

Craig Cope was the proprietor of Norco Market & Liquor in small town California.

He went viral after surveillance footage surfaced of him thwarting a robbery.

The footage – seen by millions – showed the suspect flee after being shot.

The shock of the encounter exacerbated Cope’s already declining health,‘according to ABC News.