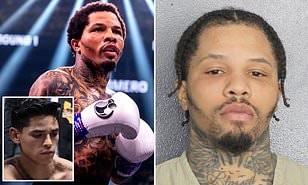 Boxer Gervonta Davis has been arrested in Florida on a domestic violence charge after allegedly striking a woman with a ‘closed hand-type slap’ and leaving her with an abrasion on her lip, according to a Broward County Sheriff’s Office incident report, Your Content has learned.

Gervonta Davis was arrested on a domestic violence charge on Tuesday.

He was shortly due to fight Hector Garcia for the WBA regular lightweight title.

That was going to be a tune-up bout before a clash with rival Ryan Garcia in April.

But the former Floyd Mayweather prodigy’s fight with Ryan is now under threat.

The victim has not been identified, but police say she does not live with Davis

TGB Promotions, which is staging the event, have not commented on the arrest,‘according to FLIPBOARD.