Buffalo man, 27, dubbed ‘Merry Christmas Jay’ is hailed a hero for rescuing 24 people from ‘blizzard of the century’ and leaving APOLOGY note for breaking into a school for shelter so stranded group ‘didn’t die’
B 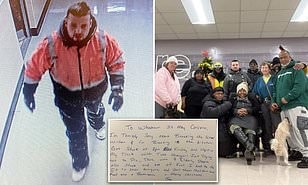 A Buffalo man has been praised for his bravery after saving 24 people from a deadly blizzard that ripped through western New York dumping up to 50.3 inches of snow on the region, Your Content has learned.

Jay Withey, 27, has been hailed a hero after he saved 24 people from a blizzard.

Withey feared he was going to die entombed in his car during the deadly storm.

He found a group of people stranded and broke into a nearby school for shelter.

After waiting on the storm, he wrote an apology to the school and authorities.

At least 40 people have died in the blizzard which ripped through western NY,‘according to FLIPBOARD.