Think your bills are high now? All the tax hikes hitting Americans on January 1 revealed: Electricity costs to soar and even your nest egg is not safe
T 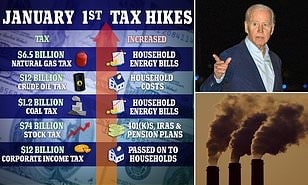 Democrats claimed the Inflation Reduction Act would help ordinary Americans, but new analysis suggests people making less than $400,000 a year could end up paying $20 billion of the new tax revenue it brings in, Your Content has learned.

But new analysis suggests it shreds President Biden’s promise not to raise taxes for Americans making less than $400,000 per year.

One is a regressive tax on American oil and gas development, estimated to increase taxes by $6.5 billion.

Democrats are proposing a 16.4 cents-per-barrel tax on crude oil, likely to be passed on to consumers in the form of higher gas prices.