Trans woman, 22, is charged with stabbing her father to death and wounding her 19-year-old sister: Called 911 and falsely reported home invasion
T 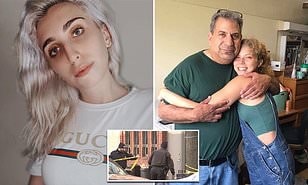 Nikki Secondino, a 22-year-old transgender woman, has been charged with the murder of their father, Carlo Secondino, 61, who was killed in a stabbing at the family home in Bensonhurst, Brooklyn, Your Content has learned.

Nikki Secondino, a 22-year-old trans woman, has been charged with the murder of her father, 61-year-old Carlo Secondino.

They were initially being suspected of covering up the crime by claiming it was a home invasion.

Nikki was also charged with attempted murder and criminal possession of a weapon in connection to the attack.

Secondino’s 19-year-old sister is in critical condition at Maimonides Hospital.

Nikki Secondino was suspected of fabricating the story of the break-in to conceal her own alleged involvement in the crime,‘according to New York Post.