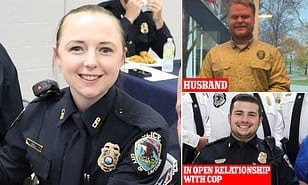 The female Tennessee cop who was fired for having sex with her colleagues claimed she was in an open marriage, but her park ranger husband did not agree, Your Content has learned.

Patrol officer Maegan Hall of the La Vergne Police Department was fired along with four other officers after an internal report in December.

Hall, who is married to Jedidiah Hall, is also accused of revealing her breasts while at a steamy ‘family’ Memorial Day boat party.

One officer, Patrick Magliocco said in the report that Hall had kissed his wife, Amy, and that her husband witnessed the incident but ‘really wasn’t on board’,‘according to NEW YORK POST.