Interview with Scott Wagner after he declares candidacy for Governor
I 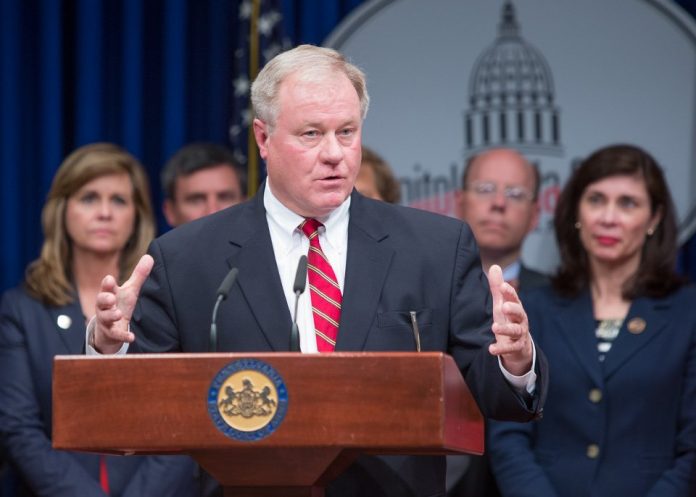 Pipersville, Pa. – YC.news spoke to Senator Scott Wagner following his news conference announcing his bid for Governor Wednesday afternoon. Many media outlets have gone to criticize the York County businessman, making this almost a replica of the successful campaign of Donald J. Trump.

YC.news: Why did you begin a year early?

Sen. Scott Wagner: Well I mentioned earlier I’ve been in the Senate for almost three years. It is important I get around Pennsylvania and really start talking to people about what the issues are – although I know most of the issues. I’m out early because I’m a business guy. If you have a business concept and you want to fire it up you have to get out early. I have to become more known to people. This is going to be a hot race & I intend to get through the primary and I intend to take Governor Wolf head on.

Sen. Scott Wagner: I honestly think if people have known Tom Wolf better people probably wouldn’t have voted for him.

YC.news: What is the most important issue you see at hand that made you run

Sen. Scott Wagner: Choking regulations are causing businesses not to grow and shutdown. Agencies whether its DEP, OSHA or whoever just show up without making an appointment. I can be in a high level meeting where they take out my safety director from a meeting. Their strategy is surprising you to catch you doing something wrong because they want to fine you. I’m fed up with government, the interference and politicians who come and ask for money but don’t do anything. I already have a career; I don’t need the money or this job. I’m now fed up and I’m going to do something about it because nobody else is willing to do it.

YC.news: How about government money management?

Sen. Scott Wagner: We have a spending problem. We don’t have a revenue problem. We are not managing – we should be managing. There’s nice to have and need to have. I know of people in departments that only work 1 – two hours a day then they don’t have anything else to do, why are we employing those people? We need to be measuring, we need to identify and be as efficient as possible. There’s an opportunity to downsize government. I’ll tell you how it’s done – its simple. We have between 2500 – 3500 people who retire every year; there are departments that have too many people and departments that don’t have enough people. [/box]

YC.news: You mentioned you supported president-elect Donald Trump; however, PennLive soon reported that you might soon regret that. Did you ever regret that?

Sen. Scott Wagner: No, not at all. Donald Trump was a very different candidate. He was in the NY real estate market. I’ve read a lot and I’ve seen documentaries on his father, Fred. He’s a tough guy; he worked seven days a week and he always took Donald along on the job. He was fortunate that his father was able to lend him $1 million. My first project I borrowed $7,000 and I went to the bank. I didn’t have the ability to borrow form my father. I started from scratch driving a truck. Donald Trump is a visionary – he took a hotel that was boarded up and run down. For him to have a vision of what it could look like and change it, that’s a huge deal for America because you have someone who can think about the future. I have absolutely no regrets. Listen, there were times Donald Trump got up and said stuff at the podium he shouldn’t have said and I cringed. Sometimes I’m going to say things where people will go “wow.”

YC.news: Did the election have any influence at all for you to run 8:02

Sen. Scott Wagner: No, it did not. I’ll tell you what, if I could’ve announced a year ago I would’ve announced a year ago. After Gov. Wolf did what he did during the budget crisis – listen, I went to Harrisburg and we passed a responsible budget and sent it to the governor’s office and he chose to veto it. I employ over 600 people; every single Friday we issue paychecks. We pay $25,000 to the state of Pennsylvania every Wednesday. Here was a guy that number one should’ve been fired on the spot – who then turned around and said it was our fault. After imposing hardships on everybody including nonprofits and schools, the budget finally got passed; after his political games. In September 2015 there was $9 billion sitting in the state general fund, $11 billion sitting in the federal fund; totaling $20 billion and he was playing games.

Sen. Scott Wagner: You should care about whose governor, because the young people are going to be left with the aftermath. The young people have to understand that this is make or break time.