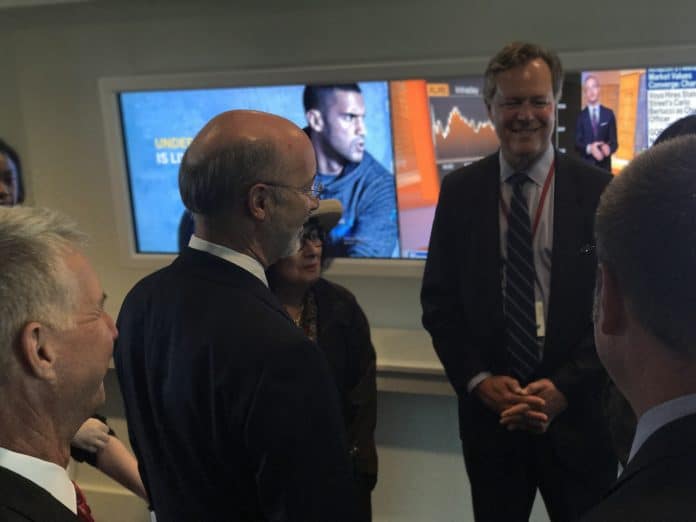 “When I was in the private sector I was a customer of SAP,” Governor Wolf told YC at the end of the tour. “They helped me and the folks at my company transform our company. We need to do a better job at using that technology to become a better commonwealth.”

“Earlier this year I was thrilled to announce SAP’s commitment to expand and create jobs in Pennsylvania and today I am excited to have the opportunity to see the company’s plans first hand,” Governor Wolf said. “It’s always inspiring to engage with employees as they showcase their innovative work. I’m thrilled that this work will continue to be done in the commonwealth for years to come.”

During the address, Governor Wolf praised SAP’s recent commitment to add nearly 400 jobs and outlined the administration’s job creation initiatives across the commonwealth.

Coordinated by the Governor’s Action Team, earlier this year, Governor Wolf announced SAP’s plans to create 392 new, full-time jobs statewide over the next three years – 242 jobs at the company’s Pittsburgh location and 150 jobs at its U.S. headquarters in Newtown Township, adding to its existing Pennsylvania-based workforce of more than 3,305 employees.

“SAP has a proud history of growth, innovation and investment in the commonwealth, and we were honored to host the governor at our North America headquarters to highlight SAP’s best-in-industry talent and technology,” said Jennifer Morgan, executive board member, SAP. “We’re proud to call Pennsylvania home and we’re especially proud to call many agencies across the government of the commonwealth valued customers and partners in innovation. We look forward to writing the next chapter of growth here and continuing to keep Pennsylvania out in front and a best-run state.”

Founded in 1972, SAP is the world’s largest business software company, with over 82,000 employees globally, including more than 18,000 in the United States. Its applications address the needs of small businesses, midsized companies, and global organizations. In total, SAP’s applications serve more than 320,000 customers in 190 countries.