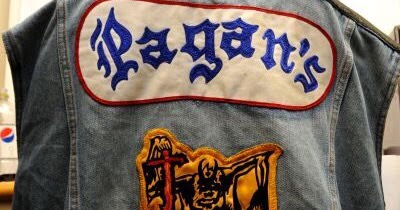 PHILADELPHIA, Pa. (YC – Gov.) – Yesterday, a federal judge sentenced Joseph Mehl, a/k/a “Joseph Montanero” to 180 months in prison for his role in a prescription pill mill that trafficked oxycodone and other dangerous and addictive opioids. In addition, the Honorable Nitza I. Quiñones Alejandro, United States District Judge, ordered the defendant to serve three years of supervised release upon release from prison, and pay a special assessment of $100, as well as entering a judgment of forfeiture.

On July 14, 2015, a grand jury in Philadelphia charged Mehl, along William O’Brien, a former doctor of osteopathic medicine, and members of the Pagans Motorcycle Club (“Pagans”), an outlaw biker gang known for violence and drug dealing, with conspiring to distribute controlled substances.

Mehl was a long-time associate of the Pagans.

O’Brien charged $250 cash for the first appointment to obtain prescriptions for controlled substances and $200 cash for each subsequent visit. Oxycodone (30 mg) was in high demand by drug dealers who could sell each pill on the street for as much as $25 to $30. O’Brien sold prescriptions for these dangerous and addictive drugs to hundreds of “pseudo-patients.”

After filling the prescriptions, the Pagans resold the pills on the street. The investigation showed that from March 2012 to January 2015, more than 700,000 pills containing oxycodone and other Schedule II controlled substances were distributed by members of the conspiracy.

On October 5, 2016, O’Brien, who was convicted by a jury in summer 2016, was sentenced to 30 years in prison. Pagans members Joseph Mitchell and Patrick Treacy were sentenced to 9 nine years’ and 20 years’ imprisonment, respectively, for their roles in the conspiracy.

The case was investigated by the Federal Bureau of Investigation, the Food and Drug Administration Office of Criminal Investigations, and the Department of Health and Human Services Office of the Inspector General. It is being prosecuted by Assistant United States Attorneys Mary Beth Leahy and David E. Troyer.