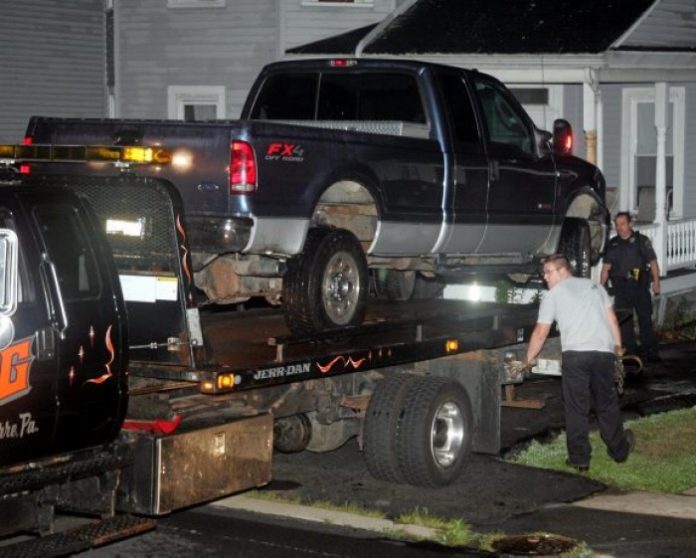 HARRISBURG, Pa. (AP) — The Pennsylvania Supreme Court has ruled that authorities did not have the right to seize a vehicle from the driveway of a hit-and-run suspect without a warrant.

The ruling issued Wednesday stems from the August 2012 seizure of a heavy-duty pickup truck owned by Daniel Loughnane.

The 45-year-old Hanover Township man was charged with felony hit-and-run in the death of 19-year-old Rebecca McCallick, who authorities have said was under the influence of marijuana and lying in the street when she was struck in July 2012.

The truck seizure dispute is one of several legal battles that have been fought over the case, which has not yet gone to trial.

A county judge ruled in 2014 that the seizure was illegal because no exigent circumstances existed to justify the warrantless seizure.

However, a three-judge state Superior Court panel overturned that ruling in November 2015, finding Loughnane didn’t have a reasonable expectation of privacy in his driveway, which was visible from the street.

The panel held that the mere mobility of the vehicle created exigent circumstances permitting the warrantless seizure.

In its ruling, the Supreme Court noted that a number of federal appellate courts have determined that a federal automobile exception — which permits the warrantless search of a vehicle if police have probable cause that it contains evidence of a crime — doesn’t apply to vehicles parked in a defendant’s residential driveway.

“Absent exigent circumstances, the concern about the inherent mobility of the vehicle does not apply, as the chance to search and/or seize the vehicle is not fleeting,” the justices wrote. “The vehicle is parked where the defendant lives and it will typically either remain there or inevitably return to that location.”

Loughnane’s attorney, Peter Paul Olszewski Jr., told The (Wilkes-Barre) Citizens’ Voice that the decision was a “huge victory” for his client and all state residents.

“It has a huge impact statewide now for anybody, for all citizens of this commonwealth who have a vehicle parked in their driveway that’s wanted by law enforcement. Those vehicles are now subject to greater protection,” Olszewski said.

Prosecutors did not respond to a request for comment.